For those who are relatively new to the Not Two/Noesta Aqui websites and Facebook page, this is a unique collaboration between two like-minded souls: myself, Waldo Noesta, and a fellow pan-Perennialist named JP Reville. I am the designated wordsmith, while JP does all the behind-the-scenes work on our websites and generally lives life up there in the Finger Lakes region of New York.

In 2014, JP worked with a small local publisher to put out his debut novel, a semi-autobiographical tale called “Birding in the Face of Terror.” Let’s just say that no part of the publishing process went as planned, and by late 2016 their relationship had ended, their contract was voided, and JP’s urge to publish was crushed.

As a mutual friend of his and several of Birding’s other characters, I really believed in his story and was certain that it should be in print. We spent much of the 2016 holiday season discussing it. I urged him to be less hasty with the whole process, to go back to the manuscript for another round of revisions, and then take the time to search for the right publisher for his genre. JP’s response was basically, “If you love the story so much, then YOU fucking write it.”

So I did. Just before New Year’s, I emailed him a revision of the Prologue. He was gobsmacked, and I was hired. Just like that, I became Birding’s ghost writer. Except JP insisted that for legal (and probably psychological) reasons, he wanted no part of the original publication to be connected to the new version, including the title and the author credit; in a sense, he gave the book to me and ghosted himself.

But it was still HIS story, and there was a lot I needed to learn about JP and his first wife (who, sadly, I never got to meet) and the ways in which his story paralleled that of the other characters (it’s a little spooky, I gotta say). We agreed that this project would require some marinating and slow-cooking on the back burner, and that I should prioritize my own project, a short work of allegorical fiction called “The Peasant and the King,” which itself has gone through some crazy twists and incarnations but was feeling ripe for the picking.

Meanwhile, we did some “flash mob focus group” surveys on Facebook and came up with a new title for JP’s story that he seemed to like. He registered a new domain for it, designed a cover, and changed all the references to Birding on the two ND Media websites. I spent much of 2017 taking notes from conversations with JP and the other living characters, mainly Vera d’Angelo and her husband Joseph, and my housemate, the lovely and estimable Betty Pickett, the earthbound goddess and unlikely guru who brought her two protégés together hoping that exactly this would happen.

I finished Pez King to my satisfaction in the latter half of 2018, and planned to focus on finding an agent to represent it. I just so happened to have two weeks scheduled off from my driving job to have minor surgery and some downtime to recover, a great time to research and make headway on that project.

Then, two years to the day after I sent JP my revision of the Prologue, he texted me just after midnight:

“We need to bring Birding back.”

What about the legal shit and whatnot?

“Fuck it. That’s what the story is called. We’ll burn that bridge when we get to it.”

Great. I’m all for it but, why the about face?

“We’ve been marketing to the wrong audience. Pantheists don’t read fiction. They’re too busy hugging trees and bowing to Neil deGrasse Tyson memes.* Don’t worry, I know where we need to go instead.”

He sent me a link to an article. I had to agree with him. This is major.

“Do you feel ready to put the wraps on a submission draft within a month or two?”

“Alright. Let’s do it then. This bird will fly again.”

So we spent the rest of my downtime retrofitting all the ND Media material BACK to Birding. It went slowly because WordPress just introduced a new design program that JP is learning on the fly (pun intended), but wow, the pages look so much crisper and cleaner as he goes. I rewrote the promotional material for Birding and the supplemental pages (based on sage advice from JP’s whipsmart partner, Asha) and for the e-book novelette, “The Continuing Story of Ananias and Sapphira,” which was also a little dated. By the end of my staycation, I think we had erased all trace of a period when Birding was called something else, and we are ready to hit the ground running when it’s done.

Now I’m back on the road, feeling healthy and strong, wondering just a wee bit WTF I got myself into here 😝 but pretty sure I can handle it. “Pez King” isn’t going to the back burner so much as both books will now be on front burners with high heat. It’s an exciting time. I’m under instructions to filter in a lot more Birding-related material into the mix here on FB, which I will start doing pronto. Like many works of fiction, the “making of” true story of Birding may be as interesting as the book itself, so I’m hoping you’ll indulge some of that, maybe even get almost as excited as we are to see it take flight.

*Dont get me wrong, pantheists, trees, and NdGT are all fine people by and large, and there is plenty of crossover there within the target audience for all of Not Two’s project. They just aren’t the bullseye.

Birding in the Face of Terror

The Continuing Story of Ananias and Sapphira

The Peasant and the King 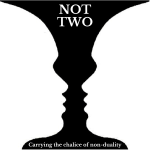 Recent Posts at : Not Two

Beyond These Four Walls

THE RESURRECTION OF “BIRDING”

Birding — From China with Love: The Landmark Tours

Universalism: That All Shall Be Sózóed

End of the Road?

Beyond These Four Walls

The Honeymoon Isn’t Over (It Never Began)

Anarchism in the US

OUR STATEMENT ON THE IMPENDING WAR

Intro to Spiritual Anarchism, part 5: The Kingdom of Heaven is Possible; Another World is Within You